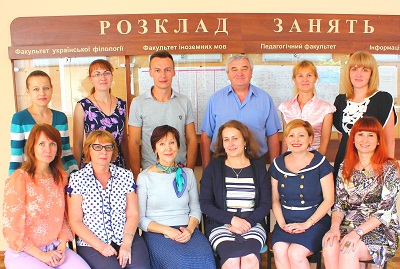 The Department of the German Language and Literature with Methods of Teaching was founded in October 1999. The head of the Department is the Candidate of Philological Sciences (Ph.D.),  Associate Professor Halyna Melnychuk. The Department provides training at the first (Bachelor) and second (Master) levels of higher education in the specialty 014.02 Secondary Education (Language and Literature (German)) and teaching German and French at the Faculty of Foreign Languages (German as the first and second languages, French as a third language) and in non-language faculties of the KSPU.

The Department provides training at the third level of education in the specialty 014 “Secondary Education (Foreign Languages)”, which is implemented due to Vice-Rector in Science of the KSPU Hamaniuk Vita, Doctor of Pedagogic Sciences, Professor of the Department of German Language and Literature with Methods of Teaching.

The Department maintains contacts with foreign agencies in Ukraine (Goethe-Institut, German Academic Exchange Service – DAAD) and international community associations, in particular the Association of Ukrainian Germanicists and the Ukrainian Union of Germanicists of the Higher Education Establishments. Teachers of the Department are members of the NGO “European Education and Science in Ukraine” and “European Association of Teachers” (Association Européenne des Enseignants – AEDE).

The academic staff of the Department works on the research issues “Lingvodidactic conditions of the formation of the foreign language communicative competence among future teachers of the German Language and Literature”. The research is carried out in three main areas: aspects of the German language and the German language-country studies in the process of forming student language competence; the interpretation of literary texts; the modern technologies in the training a teacher of foreign language.