The leader of teacher training in Dnipropetrovsk region:

from pedagogical courses to Pedagogical University

The history of teacher training in Kryvyi Rih region dates back to the early 20th century. According to the documents in 1921 in Kryvyi Rih Ukrainian teacher seminary functioned. Its graduates received an appropriate certificate. M. Ya. Borodulin was the head of the seminary at that time. The name of this man was also related to the opening pedagogical courses for training primary school teachers, preschool nursery teachers and employees of political and education institutions (October 1923). These courses headed by M. Ya. Borodulin achieved the status of higher education institution having a 3-year term of studying based on 7-year education certificate. After the first class graduation on September 1st, 1925, the courses were reorganized into pedagogical college and relocated to Nikopol. Kryvyi Rih teacher training courses continued to function as up-grading teacher development courses.

In fact, the history of the University began in 1930. At that time, the Institute of Vocational Education was founded in Kryvyi Rih within the Council Ordinance of USSR People Commissars, minute №25 / 677 from August, 11th, 1930. The Institute was headed by Ivan Ivanovych Sochniev. Classes started on October 1st, 1930. Two departments such as technical and mathematical, as well as social and economic trained students at that time. The workers' faculty was functioning within the Institute. Its graduates were eligible to enter the Institute without passing entrance exams. The Institute focused on training teachers of Mathematics, Physics, History and Political Economy, Ukrainian and Russian language and literature. Among the main tasks alloted on the newly created Institute were to train a new generation of young Ukrainians living in Dnipropetrovsk and Kryvyi Rih region. 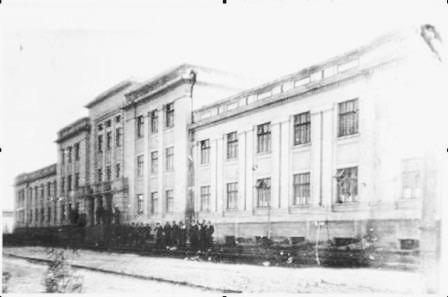 The first Building of University

In 1933, the Institute of Vocational Education was reorganized into a higher educational institution. Following the decision of NEC of Ukraine Kryvyi Rih Institute of Vocational Education was renamed into Kryvyi Rih Pedagogical Institute on July 10th, 1933. The total enrollment was about 180 students during the 1933-1934 academic year. The Institute changed not only the way but also the content of education training. Since 1935 in Kryvyi Rih Pedagogical Institute three faculties (Physics and Mathematics, Language and Literature and Natural Science) have already been operating.

Among the main achievements of the first decade of institution existence were the following:

- creating the fund of textbooks (at the beginning of the 1940s the Institute's library included about 30 thousand books);

The teachers, the staff members and the students of the Institute along with all the Ukrainian people had to experience an inhuman man-made famine in Ukraine (1932-1933) and repressions of the 1930s. The well-known Ukrainian theorist of literature and professor S. Haievskyi, Director of the Institute Т. Kyselov, Dean of Physics and Mathematics Faculty L. Kareta, Heads of the Subdepartments professor V. Doroshenko, associate professors A. Dzhydarian, K. Makarevych, Military Head O. Ivanov, associate professors V. Avramiv, D. Boliubakh, teachers D. Bohatyrov, K. Hordievskyi, H. Klein and others were convicted on trumped-up charges.

On the threshold of the aggression of Hitlerite Germany Kryvyi Rih Pedagogical Institute was one of the biggest higher educational establishments with full-time, part-time and correspondence education. Between 1938 and 1952 the Institute had a special department which trained specialists for incomplete secondary education. In the early 1940s according to contemporary records the student body comprised more than 2000 people. There were 12 subdepartments in 3 sections with 72 teachers in the Institute.

With the beginning of the war the the Institute documentation and the equipment were partially evacuated to the eastern part of the Soviet Union. The majority of the teachers and students went to the front and joined people’s militia. Military victory and courage of the students, teachers and staff members of Kryvyi Rih Pedagogical Institute, who were the veterans of World War ІІ, were honoured with state awards. In particular, Vasyl Skopenko – a 1935 graduate of Physics and Mathematics Faculty – awarded the title of the Hero of the Soviet Union. In early post-war years the Hero of the Soviet Union Yakiv Verhun graduated from Kryvyi Rih Pedagogical Institute.

In October 1944 the classes in the Institute were resumed after the city had been released from the Fritz occupation. The full-scale functional restoration of the educational establishment was possible owing to the staff of the institute headed by Terentii Horb.

The pre-war educational building of Kryvyi Rih Pedagogical Institute was beyond repair, so the educational establishment was housed in the pre-war building of one of the city schools. In spite of all the difficulties of early post-war years (moral and physical exhaustion, famine, ruin) the first post-war graduation ceremony of Kryvyi Rih Pedagogical Institute took place in 1945. In August 1951 under the order of Education Minister 8 professors of the institute got the award pin of the Expert of Popular Education for excellent conscientious work and exemplary execution of educational work.

From 1951 till 1961 Kryvyi Rih State Pedagogical Institute was headed by the candidate of chemical sciences, associate professor Mytrofan Bon, who initiated the revival of scientific traditions of the Institute. The traditional teacher and student conferences took place which resulted in publishing of the second and the third volume of the collection of articles “Scientific notes of Kryvyi Rih Pedagogical Institute” in 1957 and 1958. The foundations of detailed scientific research on the history of Kryvyi Rih and geobiocenological research were laid by P.Varhatiuk and I. Dobrovolskyi.Candidate of economic sciences, associate professor Feliks Mazur, the rector of the Institute between 1961 and 1973, took over the reformation of Kryvyi Rih State Pedagogical Institute. The training programmes of future teachers are becoming more varied.Thus, the first enrollment of students on specialty "Primary education" took place in 1960. "Music and singing" specialty was launched in 1967. The students' scientific and creative activity is demonstrated at various competitions levels.Just in that very period, Kryvyi Rih Branch of Ukrainian Geographic Society, based on the institution, begins its fruitful work, chaired by the first scientist and geographer in Kryvyi Rih region T. A. Klevtsov.In 1966, the new academic building in Gagarin avenue was put into operation. This event assisted in teaching students in one shift since 1966-1967 academic year. New Botanical Garden was laid out and new sport complex was built next to the new main building. In 1962 and 1976, dormitories began to accommodate the students and a dining room was built.During 1973-1979 Candidate of technical sciences, associate professor Valentin Ivanovych Bykov, was the head of the Institution. In 1970-80 the new faculties – General Technical Subjects (1974), Music and Teaching, Primary education (1975) were opened in Kryvyi Rih State Pedagogical Institute.Chair of Physics launched the new direction of scientific research "Computer simulation of defects in crystals" leading by atomic physics scientist A. Yu. Kiv since 1975. Faculty of Physics and Mathematics served as a scientific proof for holding regular conferences on diffusion and making defects in solids. They acquired the status of an All-Union permanent workshop. The one and only in the city Astronomical complex established in KSPI, gains special popularity.From 1979 to 2000, Kryvyi Rih State Pedagogical Institute was developing under the leadership of the USSR Honored teacher, Professor Pavel Ivanovych Shevchenko for more than 20 years. Due to his hard-working and creative activities, the higher educational institution has developed significantly. New faculties, such as Geography, Art and Graphics, Foreign Languages, Ukrainian Philology, have been set up. The institution commenced teaching specialists in History, English and German languages, Practical psychology during the period of his activity.The very new stage in the history of the institution began with the proclamation of Ukraine's independence. Alongside with the other things, the scientists of the institute were actively developing the ideas of national pedagogy. Research Laboratory of National Education (supervisor – O. O. Liubar, Honoured Figure of Education of Ukraine) became the coordinating center of national activity. In 1992, the institute offered running postgraduate programs in 8 specialties. This greatly contributed to the qualitative changes in the teaching staff. In the second half of the 90-th the institute numbered 8 Ph.D. teachers and 55 Candidates of Sciences.The new faculties and specialties were opening, such as Faculty of Foreign Languages (1995), specialty “History”, (1997), Faculty of History (2002), specialty “Practical Psychology” (2000), Faculty of Arts (2005).Since April 1999, having received the 4-th level of accreditation the institution started working as the university (the Decree of the Cabinet of Ministers of Ukraine, from March 16, 1999, № 403). Volodymyr Kostiantynovych Buriak, EdD, Professor was appointed as Rector of Kryvyi Rih State Pedagogical University in 2000 and held the position until 2010.Since 2010, the institution has been leaded by Ph.D., Professor Yaroslav Vladyslavovych Shramko.During 2011-2015 the higher educational institution functioned as a part of Kryvyi Rih National University, which was established under the Decree of the Cabinet of Ministers of Ukraine, № 280 from 21.03.2011 on the base of Technical University of Kryvyi Rih and Kryvyi Rih State Pedagogical University by their merger. However, the life itself has demonstrated that the fundamental higher educational establishment for teachers training as a leading educational, scientific and methodological center for the entire system of pedagogical education should exist in Dnipropetrovsk region. Therefore, Resolution of the Cabinet of Ministers of Ukraine from January 27, 2016 № 51-r, restored State Higher Educational Institution "Kryvyi Rih State Pedagogical University".Nowadays Kryvyi Rih State Pedagogical University is a center of innovative educational and methodological research, scientific, cultural and national-patriotic center of the city and the region, entrusted with the mission of training highly competitive professional teachers for all parts of the education sector.